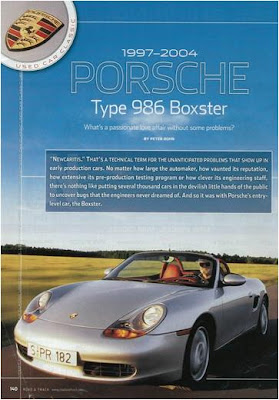 Submitted by Ryan Barnett 05/05/2009
The webappsec space has been often compared to the early years of the automobile industry. This was the time before safety mechanisms such as seatbelts, airbags, etc... were mandated by governing bodies. Experts rightfully point out that today's web applications are much like the cars of yester-year in that the focus is on features and not on the safety of the users. While I could go on and on with many comparative aspects between the auto industry and webappsec, I want to focus this blog post on one point in particular. The interesting phenomenon called Newcaritis. Take a look at the advertisement by Porsche. for the Boxster. The text box reads:

“Newcaritis”. That’s a technical term for the unanticipated problems that show up in early production cars. No matter how large the automaker, how vaunted its reputation, how extensive its pre-production testing program or how clever it’s engineering staff, there’s nothing like putting several thousand cars in the devilish little hands of the public to uncover bugs that the engineers never dreamed of.

For those of you who have been in charge of either assessing or protecting production web applications, this definition must sound very familiar. It seems as though newly developed and deployed web applications suffer from Newebappitis! The issues are the same - even though organizations attempt to run thorough testing phases, there is just no practical way to duplicate all of the possible ways in which real clients will interact with it once it is in production. The point is that you must have mechanisms in place to identify if/when your clients and web application are acting abnormally. Web application firewalls excel at detecting when clients are submitting data that is outside the expected profile and when web applications respond in an abnormal manner such as returning detailed error messages.
Posted by Ryan Barnett at 10:34 AM