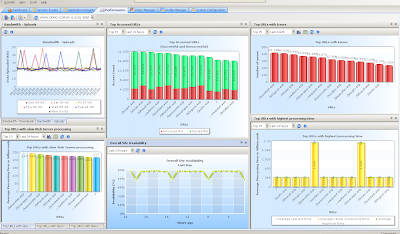 With this information, it is easy to quickly identify the top URLs with high response latency and to pinpoint whether this is an application processing or networking issue. This data is a much truer picture of DoS conditions vs. rate limiting thresholds. The main advantages that this data brings to DoS threat modeling are identification of fragile resources that would be susceptible to attacks and to identify the an estimated threshold setting.
Posted by Ryan Barnett at 11:48 AM 3 comments:

This appears to be a probe attempt to access the Apache Tomcat Admin interface. This is due to the combination of URI "/manager/html" and port 8080. It looks as though the client is submitting authentication data in the Authorization header. If you decode the base64 data, it shows the credentials as "admin:admin" which is the default username/password combination when Tomcat is installed.

WASC Honeypot participant Erwin Geirnaert has seen similar activity and provides more data here. The attackers are conducting brute force scans trying different passwords for the "manager" account -
What do the attackers want to do once they gain access to the Tomcat server? Install backdoor/command WAR files so that they can execute code. Time to double check your default account passwords and implement those ACLs to only allow authorized clients to your Management interfaces...


Posted by Ryan Barnett at 9:58 AM No comments: